This weekend marks the 54th anniversary of a remarkable human achievement…

People said it couldn’t be done… many had tried, and everyone had failed.

They said it was impossible… we just weren’t built for it.

Experts and athletes believed the human body just wasn’t capable of running a mile in 4 minutes or less.

Time magazine even said the dream of a four-minute mile was once ‘considered a physical impossibility’.

In 1945, a Swedish runner called Gunder (“The Wonder”) Haag came close, running a mile in 4:01.4, but runners still struggled to beat him for another 9 years.

For decades, people had thought it was impossible to break the 4-minute mile, but because of Bannister’s accomplishment, nearly a dozen runners were inspired to beat the 4 minute mile barrier within 2 years of his record.

Some have even dubbed this ‘The Bannister Effect’.

I had a similar experience last year when I was looking at my strategy creation and testing process. It would take so much time and effort to test trading ideas and it could take me weeks or even months to build a strategy I would consider trading.

I had a well-defined process, but it just took too long. And it seemed like that was just the way it would be, it couldn’t be any faster.

That was my ‘4-minute mile’ barrier.

Think about your strategy creation process now, perhaps it sounds something like this:

It’s alot of work, and it needs to get done, but the truth is, it’s really repetitive.

You probably follow the same process over and over again, and you probably do most of it exactly the same way every time. So why are you doing it manually? Wouldn’t it be great if you could automate it?

After all, you’re probably automating your trading execution, so why not automate your strategy creation process too? Or at least all those mind-numbing repetitive tasks you complete over and over again.

Sounds too good to be true?

It’s entirely possible to completely automate your own strategy creation process. How do I know?

Because, I’ve done it.

But, I never would have known it was possible unless someone had shown me.

It was like I was watching someone break the ‘4-minute mile’, and suddenly the possibility was open to me too, and I figured out a way to do it as well.

And now I’m showing Breakout Masterclass students how they can also fully automate their entire strategy creation process in the ‘Automated Strategy Creation for Busy Traders’ program. In fact, some students are achieving fantastic results already, like Taha:

The ‘Automated Strategy Creation for Busy Traders’ program is only available to Breakout Masterclass students so you can’t get it unless you’re in the Masterclass, however…

…if you want to get a small taste of how to automate part of the strategy creation process, we share how to build simple breakout strategies automatically in the 14 Day Breakout Challenge.

In the Challenge we share a simple framework you can use to build breakout strategies using building blocks that have been proven to work, not just to create pretty-looking backtest reports but actually work in real-life trading too.

So, you don’t need to sit in front of the computer all night coding up ideas and testing them manually.

And you can start speeding up the strategy creation process fast so you can break your own ‘4-minute mile’ barrier.

Don’t let anyone tell you it’s impossible, because once you stop believing something is impossible, it becomes possible.

You can find out more about the 14 Day Breakout Strategy Challenge here.

Have a great weekend!
Andrew

What do you expect?
The dangerous lure of perfection

Using the same proven techniques that have helped hundreds of successful breakout traders already... to even launch their own hedge funds! 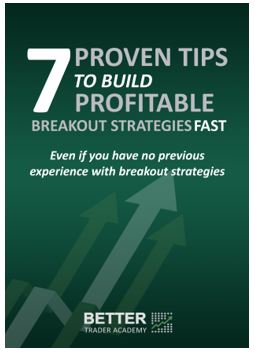