When I wrote my Wagner Award winning paper “Know your System! – Turning Data Mining from Bias to Benefit,” I had two goals in mind:

I’ve subsequently realized that the paper’s focus on goal #2 was actually a bit limiting. Therefore I decided to write this addendum to the original paper to explain some of the assumptions and limitations of SPP and also describe what I now consider to be a better alternative.

As mentioned before, I chose the specific steps in the process to keep things easy to implement for the average system trader:

However, embedded in these steps are some assumptions and limitations:

In reality, dealing with assumption #1 is not trivial. I specifically did not address it in the paper. An observation point is a specific value within the parameter scan range you plan to evaluate. For example, let’s look at moving average lengths. If your scan range begins at 50 and ends at 250, you could choose to evaluate the following specific moving average values: 50, 75, 100, 150, 200, and 250. The six values are observation points.

Depending on the trading system, assumption #2 can become problematic. A system with many different rules and parameters and a fine grained selection of observation points can quickly lead to a computationally infeasible scenario for the average system trader working with even a powerful PC. This wouldn’t be a problem for a hedge fund or institution but then I developed the SPP method specifically for the “average” system trader, not sophisticated investors with deep pockets.

Somewhat related is limitation #3. SPP must be customized to each trading system and thus the number of permutations can vary significantly. It is both time consuming and tedious to go through the process for a large number of trading systems.

In order to address all of these, I’d like to introduce a close cousin of SPP which I named System Parameter Randomization (SPR). The fundamental mechanism behind both SPP and SPR is the same, yet the implementation is very different. SPR can be thought of as a random sample of a continuous SPP distribution. The process is explained in the steps below:

With the SPR method, the problem of picking appropriate observation points is no longer an issue as the Monte Carlo process randomly chooses them. This works very well due to the statistical “law of large numbers.” Parameter combinations are chosen (sampled) randomly and as the number of iterations increase, the descriptive statistics of the sample become better estimates of the population.

It is clear that SPR addresses the assumptions and limitations mentioned above but there is another assumption behind SPP which is also applicable to SPR:

This assumption is the subject of several critiques of the SPP paper. SPP and SPR (I’ll refer to them as SPx) are not designed to evaluate indicators outside of a more comprehensive trading system. In brief, just evaluating a single indicator (or a couple) does not enable enough random interactions. For example, the system used in the SPP paper had four parameters and resulted in over 4,000 different combinations. It is unlikely you can get enough meaningful samples just using a single indicator.

SPx is a method intended for application to a complete system in a portfolio context, meaning inclusion of filters, setups, entries, exits, signal ranking rules, and money management rules and also including commissions and slippage.

One of the finer points I make in the paper is that variation in the parameter values in the optimization ranges leads to variations in the way ALL the system components interact. This variation leads to randomness in trading results. Some entries are earlier, some later, some trades are shorter, some longer, etc. You can do the same thought exercise for all system components. This randomness allows the creation of the SPx distribution from which you calculate probabilities.

Based on a set of random outcomes, the experience of the policy/portfolio/company is projected, and the outcome is noted. Then this is done again with a new set of random variables. In fact, this process is repeated thousands of times. At the end, a distribution of outcomes is available which shows not only the most likely estimate but what ranges are reasonable too.

The same thing can be done for a trading system. There are many possible stochastic inputs, but the obvious one is price action. Although the direct approach of randomizing input price action is possible, it can be problematic and difficult in practice. So instead of directly randomizing price action, we can turn things around and randomly select parameter values.

Why? As system developers we have to understand that the best we can hope for is that there is some signal in all the price action noise and that our trading system will pick-up on that signal to generate more profitable trades than losers. Regardless of whether you subscribe to the efficient market hypothesis or not, it is very well understood by both academics and practitioners that price action contains a large noise component.

What happens when you optimize on this historical price action that contains a lot of noise is that your selected optimal parameter set is at least partially fit to a noise component that will never repeat. Thus randomness has influenced your chosen parameter set and the historical performance is positively biased. Here is what Perry Kaufman has to say in his excellent book Trading Systems and Methods:

Use the average of all test results. Specifying reasonable parameter ranges is important when evaluating the test results. Nearly all sets of tests will show losses, but hopefully, there will be some areas of attractive profits. If you tested 1,000 cases and 30% of the tests showed returns of about 25% per year, 30% showed breakeven results, and the last 40% showed various profits and losses, you might say that the 30% profitable tests are a broad area from which parameter values can be chosen. That assumes that the market will continue to perform in a way that allows those parameters to generate profits during the next year. It is better to assume that the price patterns change; you cannot tell which combination of parameters will be the best. Regardless of the past returns for the parameters you choose, your expectations should be the average performance of all tests.

Using the average (or median as I suggest in SPx) means there is no selection and thus no selection bias. Better yet you can use the entire SPx distribution to draw conclusions. It comes down to two things:

Projecting these conclusions into the future, we know that whatever parameter set we choose from the past will be sub-optimal because of the random noise we will encounter in future price action. We can simulate this effect by randomly choosing parameter combinations and applying them to historical data. This is exactly what SPR does.

You may also want to check out the podcast interview here. 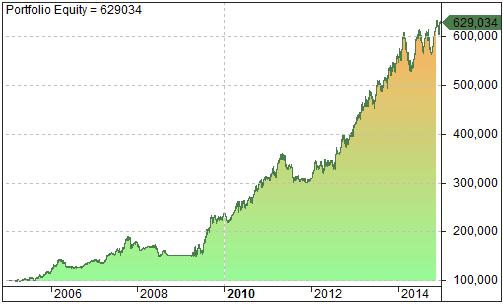